Tinder and Bumble are two of the most downloaded dating apps out there, with more than 50 million and 40 million users respectively. Although Tinder predates Bumble by 2 years, the difference in the number of users is not that great, as you can see.

Does that mean that Bumble could surpass Tinder in the upcoming future?

Well, we certainly can’t tell you that for sure, but such a growth in such little time definitely speaks wonders for Bumble. Here we’ll compare some aspects of Tinder and Bumble, the second most popular dating app out there, and let you be the judge of which one is actually better!

Tinder vs Bumble: The Ultimate Analysis

A thing in which Tinder and Bumble greatly differ is the women/men ratio, with double the number of men than women, this certainly represents an important difference.

From a female point of view this might be considered as a great advantage because they have a wider selection from where to choose from. It might sound a bit cold but if you see it from and offer-demand point of view, it’s always better to be in the side of the most demanded than on that of the greatest offer.

Therefore, this could actually be detrimental to the guys using Tinder, because this implies a lot of competition out there, with a smaller sample of women to match with.

Bumble’s 59% of Users are Females:

Bumble’s gender graph makes it fairer for both sides, as it does allow more balanced interaction. Also, for the ladies out there that might feel a bit overwhelmed about all the messages they’re getting, this might help to keep things a bit calmer.

In Bumble, the ladies make the first move.

This can be seen from a lot of perspectives. The whole concept of the thing is to empower women to take the first step and for them not to feel too overwhelmed by all the messages.

This is easily arguable considering that on Tinder you just receive messages from your matches, who are people that you initially swiped right to, so the whole intimidating thing…might be a matter of perspective.

But it is true that some of those opening lines or first messages can be quite explicit at times, which is definitely not welcomed by the majority of women. By giving them the option to start the conversation, Bumble does make sure that women are the ones that get to try and set the tone of the conversation.

Something that does tend to happen is that on Tinder guys are more proactive and there’s an almost unspoken rule that they have to text first.

Again, it is not a rule, but it is what tends to happen for the majority of people.

This, apparently, also translates into the guys being more inclined to actually get the date and get to meet each other, which is not seen as commonly on Bumble, where a lot of conversations never lead anywhere and actually getting to the dates is not as easy.

Now, something that could contradict this a bit is a survey in which 3,852 students were interviewed and as it turns out, only 29.2% of those that used Tinder, actually got to meet their matches.

So if that’s the percentage for Tinder and we have said that in Bumble this happens even less frequently, we can guess that an even lower percentage of Bumble users actually meet their matches, which is not very encouraging. But we’ll have to wait for statistics to back up that supposition.

Bumble is the clear Winner Here:

This is one of my favorite things about Bumble. So the girl has the opportunity to text first but only during the first 24 hours of a match, so that does add a little bit of pressure but it also pushes you and motivate you to just go for it if you actually like this guy, and I think this is a pretty good feature.

Also, say bye to all those archived matches there, which I think is also refreshing and does keep things cleaner and smoother.

On the other hand, in Tinder there’s not a thing as a time limit, so someone that texted you and you never answered to can actually keep texting you for eternity unless you un-match them.

This is not necessarily a bad thing if you believe in love at second sight or that the one that perseveres is the one that gets the cake…but Bumble’s expediency is something to consider for sure.

Yes, you read it, marriage.

According to Bumble’s CEO there have been around 20,000 marriages that have come from people meeting each other on the site.

We don’t have the numbers for Tinder, but considering that the app does have more of a hookup reputations, these numbers might differ. But this doesn’t mean that you’re guaranteed to find your future spouse on Bumble but these numbers do seem promising.

This also matches with the demographics we talked about earlier, it is more likely to find long-term partners if you’re mostly meeting people that have a certain stability in their lives and are in a good position to start something solid.

So maybe you go on less dates on Bumble but you get more quality dates? The jury is out on that one.

This is a huge one in our current world. Just like Bumble benefits from the feminist wave that’s been going on with their condition of women making the first move, Tinder has adapted and allows for identification as belonging to other genders aside from female and male.

With over 50 different options for identification (and even an option to just write down how you identify), Tinder definitely wins this one over Bumble.

As progressive as Bumble is, you can only identify as either female or male, which I think is a huge drawback if they’re trying to keep up with the current times. This one is definitely a win for Tinder, because they do get a lot more downloads and a broader audience because of this option.

Tinder or Bumble – Which One For You?

This doesn’t mean that the place to finds something serious is Bumble necessarily, because there are a big number of relationships that have come from Tinder, it just might not be the easiest of the two for this purpose.

So which one is better?

Depends on who you are, what you are looking for and your style of approach. As always, it’s all up to you.

At the end of the day, they’re both solid platforms that help you meet new and interesting people and, hopefully, meet someone that’s looking for the same thing that you are. And isn’t that all you really want from a dating app?

Tinder vs Bumble – My Take!

Why not download both? And just see which one adapts better to you and your lifestyle? After all, the whole idea is to enjoy yourself and explore your options, so as long as you don’t take it that seriously and it doesn’t imply a huge investment of your time, a little bit of exploring might benefit you! And then you are the one that gets to decide.

As always, enjoy! Dating apps are convenient and they can be a lot of fun if you just relax, and go at it with the best of vibes but without putting too much pressure on yourself. After all, we’re all on the same boat, looking for someone to share our time with.

Tinder Vs POF | Which Is Better?

OkCupid Vs Tinder | The Real Winner! Milagros is a food lover and she loves to travel the world which you observe on her Instagram. She has been user of dating apps which enables her to share her experience on DatingXP. 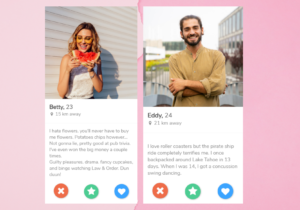 10 Questions to Ask Your Tinder Match