I’ll write this article as if I’m giving advice to a man. If you’re a woman, I apologize. It’s just easier to keep it to one gender instead of saying “him/her” all the way through the article.

Speaking as a woman, I also know what lines worked for me on Tinder…and what openers didn’t. If you’re a woman, the basic rules remain the same though, so I’m sure you can pick up a tip or two from this article as well!

If your Tinder opener is “You’re hot,” chances are she will leave the conversation.

If, on the other hand, someone compliments my interests, I’m instantly prone to reply to them.

So, Tinder opener can be a comment on her interests.

“Hello fellow chocoholic! So, tell me: what’s the best chocolate ever? (This is clearly a deal breaker by the way. If you have poor taste, I’m not sure we’ll get along… ;))”

“You like wine! So do I 🙂 So come on, impress me: tell me about your favorite wine!”

Have fun with being cheesy Tinder opener — just make it clear you don’t take yourself too seriously and think you’re some master punster. If she says she doesn’t use Tinder for hookups, you can say:

“It’s such a shame you don’t like night stands. I’m great with making furniture 😉 I can even make you two night stands and a table…if you’re nice… ;p”

Always make sure it relates to her profile though. It has to be linked to her. Not some random pun. Then again, if it’s a GIF, you can get random.

3. Go for the Animal Shots

If they have a pic with an animal, it probably means they really like that animal. So if you show an interest, you’re immediately getting a point, or two.

“I’m jealous of that dog of yours. He looks like he’s got some serious cuddling skills. Think he’ll teach me a trick, or two? 😉”

“That horse of yours has some serious attitude. I like it. What’s his/her name?”

Inside scoop: Questions to Ask Your Tinder Match.

If she happens to mention she likes spicy food it will make up for a good Tinder opener.

“It’s all about the tabasco! (And sometimes the sriracha…)”

“So, tell me: tabasco, sriracha sauce, or chipotle peppers? What kind of hot do you prefer? 😉”

If she mentions she has a sweet tooth on the other hand:

If she loves to cook:

“Great cook huh….so tell me, what would you cook me if you’re trying to impress me? 😉”

5. Challenge For a Date

If she has something that can be interpreted as a challenge in her bio — challenge her on it.

Say she says: “Total computer nerd, with a love of great wine and even greater cooking. Have been known to do crazy adventurous things. Have a sincere love of killer heels and flip-flops respectively. If we race up a mountain, I bet I’ll win. I’m a wickedly fast runner ;)”

“Clearly you haven’t met your match yet. I’d totally win the race. Or at the very least: we’d hit the finish line even 😉”

You can also challenge a simple statement, such as: “Love ice cream. Won’t share. Ever.”

“I bet, I can make you share that ice cream…I can be very convincing…”

It’s playful. It’s challenging. And it will probably lead to a pillow fight, or seductive kisses, over the ice cream one day.

She has a picture by a stunning beach? It will make up for a good Tinder opener.

“I need it to work out between us, because you have to show me where the epic beach in your pictures is…”

“The food in that restaurant in your pictures looks epic. I think you’ll have to take me there 😉”

“I need it to work out between us, because I can tell you know how to get tickets to Burning Man and I’ve never been… ;)”

“You mention you love Rome. Great. I’ve never been. So when do we start packing? ;)”

7. Get Straight to the Point

If you have a good profile, so she can see you aren’t a total nitwit, then cut to the chase.

“You love cocktails. I know a place. Tell me the time and the date, and we’ll make a plan 😉”

“You love spicy food. I know one of the best places in town. Tell me a time and a date and I’ll make a reservation 😉”

8. If She’s Looking for a Partner in Crime

This is actually a really good one to spin off on. You can move onto things like “the perfect crime” and plan a heist together.

“I’m a master criminal. I only partner up with the best. What’s your crime speciality?”

Inside scoop: How to ask a girl out on Tinder.

If she has a shot wearing a fake mustache, a massive hat, a masquerade outfit…

“Next time there’s a masquerade, I’ll be the Clark Kent to your Louis Lane…” (If that’s what she is in the photo, obviously.)

“Love the hat. We must have a hat party. I call dibs on the sombrero.”

“Anyone who can appreciate a good masquerade party is a friend of mine. Who do you plan going as next time?”

My name is Maria. Do you know how many songs there are about me?

If a guy started a conversation with: “She reminds me of a West Side Story…” or “I just met a girl named Maria!” I’d probably melt though.

Likewise, if she’s from California, living in NY, but says she misses the California sunshine, starting with:

Obviously, it needs to be a popular song. Just because I, personally, happen to know almost every line to Meet Virgina, I’m not sure the Virginias know it…so “She only drinks coffee at midnight…” might not be a great way to start a conversation with a Virginia.

I, on the other hand, would have replied: “When the moment is not right…”

Inside scoop: Here’s how to talk to girls on Tinder

11. If you meet a Virginia from West Virginia

Being unique is always one of the best Tinder openers, because it sets you apart.

Normally, no one likes an illiterate guy, especially on a dating site. But when you’re playing The Goofy Illiterate Man, you’ll have the women eating out of the palm of your hand.

The thing with this opener is that you cannot go wrong whatever you say.

If they encourage you by saying something like “sure!” you then say: “I’m sorry, I don’t know what that means.”

It’s hilarious, it’s charming and it works every damn time. Try it!

Truth or Dare is a fun game that everyone has played at some point in their lives. We like it because it’s edgy and a bit dangerous.

And when you use “Truth or Dare?” in your opening message on Tinder, you’re eliciting their curiosity.

After all, who doesn’t want to play Truth or Dare on a dating site with a total stranger? It taps into human psychology so well – namely, that of wanting to bond with someone. And nothing helps us bond better than a bit of Truth … or a dare.

As you can see from the image below, you don’t actually have to get the girl to reveal her deepest, darkest secrets. That would be weird. Instead, you can use Truth or Dare to smoothly get her SnapChat:

The thing with making a joke out of someone’s real name on Tinder is that you have to be REALLY careful not to actually offend them. Otherwise, they for sure won’t reply. Or, if they do, it won’t be a positive reply.

Check out the image above to see how this guy did it.

It’s funny because of the connotations of Isis. Instead of a) avoiding the fact that this girl is called Isis (come on, it’s the elephant in the room and she’d think it weird if you DIDN’T mention her name) or b) getting all dark and serious by asking something like ‘is it hard having a name like Isis?’, the dude instead makes a joke and in turn keeps everything light. It works a charm.

Okay, it’s not always Christmas. But when it IS Christmas, nothing grabs a girls attention better than a festive one-liner. Like this:

This is cute because it’s seasonal and funny. It’s not amazing but it’s in keeping with the festive season so gets massive brownie points instantly.

Here are some more festive openers:

“Are you Christmas because I wanna merry you.”

“Black ice isn’t the only thing I’m falling for, goddamn.”

“Call me Rudolph because you just sleighed me!”

“Do you live in an igloo? Because you seem like a pretty cool person.”

“Even Santa doesn’t make candy as sweet as you.”

“Can I take you out on a first date in this snow? I wanna show you I’m not a flake-y person.”

Some of these are super duper cheesy but you’ll be amazed at how well they work at Christmas!

Dad jokes are lame, terrible – but girls absolutely love them!

This one in the pic below is a classic dad joke. In this particular example, the girl said in her profile that she “loves dad jokes.” You’ll see this often – for whatever reason, girls are a sucker for the kind of rubbish joke your dad would tell at a party. You might not think they’re that funny, but she’ll giggle endlessly. They’re so bad they’re good!

So try opening with a dad joke now and then and see where it gets you. Chances are she’ll think your cute enough to talk to. Here are a few more you could try:

“What time did the man go to the dentist? Tooth hurty-y.”

“A ham sandwich walks into a bar and orders a beer. Bartender says, ‘sorry, we don’t serve food here.”

Wanna know a really witty way to get a girl to reply to you? Challenge her to prove she isn’t a bot!

It doesn’t really matter what you ask her to say exactly but the more random it is, the better.

“I’ve been burned by SO many bots on here recently so please can you type your number out so that I know you’re genuine and real? Honestly, it’s the ONLY way I can verify you’re real because a bot wouldn’t know your number.” 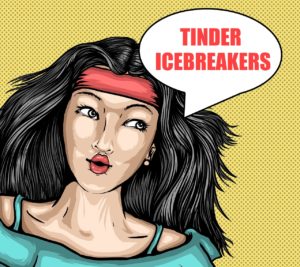 15 Best Tinder Icebreakers: (Get Her Attention!) 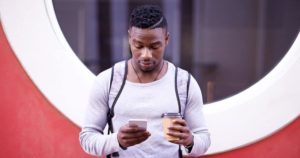 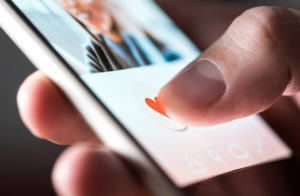